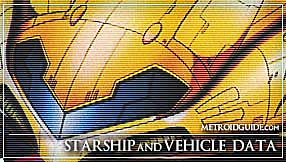 For before the recorded history of the cosmos, earlier space ferriers have relied upon the skillful enginnering of spacecraft to traverse the stars. In a galaxy as demanding and as deverse as the beings who populate it, it is no wonder that the modes of travel are limitless. To small cargo carriers to large assault motherships, these manner of vessels and vehicles come in many shapes and sizes. The following is a list of craft directly or indirectly related to the creature known as Metroid.